The following article first appeared online on the Vogue Australia website OK Magazine, and is reproduced here in part.

It’s been a tumultuous year for Melissa George, but the Australian actress is proving her mettle and extraordinary versatility with new roles in film and television.

Many Australian expats speak wistfully about triggers of home, and the moment they know they’re back on Australian soil. For some, itis the unique Antipodean light, or the trace of eucalypt that lightly scents the air. For others, it’s the deep blue of a sky that seems to stretch on endlessly.

But for Melissa George there’s one specific moment that lets her know she is home: a simple two-word phrase she always hears as she hands over her Australian passport. “I love the music they play – all the Australian songs from the 80s and 90s like John Farnham and INXS, all the songs I heard growing up with my parents in Perth. But it’s the man or woman who stamps your passport, who says [and here George adopts a super-ocker accent]: ‘Welcome ’ome.’ It’s just that. ‘Welcome ’ome.’”

It was indeed welcome when, for a few precious days in November, home was The Cullen in Melbourne, where George was staying courtesy of luxury watch and jewellery makers Kennedy, who had invited her to Derby Day as their guest. George flew in direct from New Orleans and the set of The First, an eight-part Hulu miniseries she is filming opposite Sean Penn. It was a whirlwind trip: a photo shoot with Vogue, some Kennedy commitments for which she would wear Australian designer Jason Grech, followed bya day at the races dressed by Schiaparelli, before returning to New Orleans via some family time in Paris with young sons Raphaël and Solal. 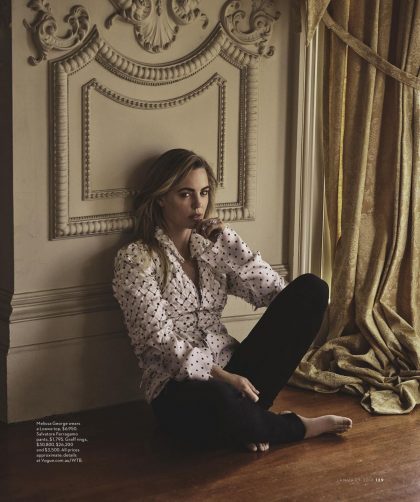 It all appears very luxurious, but the reality is another story. George is awaiting the verdict on a joint appeal in Paris related to an ugly custody battle with former partner Jean-David Blanc that followed a domestic violence incident in September 2016. As it stands, George is forbidden from taking the children outside France without Blanc’s consent. One of the many side-effects of her domestic situation is that the film and television actor has turned down various offers over the past 12 months, preferring to stay close to her sons rather than accept work that invariably requires her to be in the United States and beyond.

The Melissa George sitting before me today is refusing to be cowed, hopeful the judge will rule in her favour and determined to find a silver lining in what she says has been a hellish 12 months. Dressed simply inblue jeans, a white blouse and an elegant mustard jacket, George ispoised and genial. She ushers me into her hotel room and offers me a drink – no gatekeepers monitoring our every word, just the pair of us. She is candid, but savvy. After all, here is a woman who has successfully made it into her third decade working in the notoriously tough industry of show business. She knows what she’s doing.

Now 41, George became a household name when she was just 16 years old, courtesy of the iconic Aussie television soap opera Home and Away. A keen tap, ballet and jazz dancer growing up in Perth, George was also an accomplished national rollerskating champion when a brief spell in modelling introduced her to a casting agent. The role of teen runaway Angel Parrish followed soon after, forever altering the course of George’s life.

“I left Perth to go to Sydney to be a teen actress and it was really hard. I used to lock myself in the closet and call my mum and cry,” she recalls. Within three years she had a huge fan base and had made enough money through a side business selling Angel-themed pyjamas to buy herself an apartment in Sydney’s Elizabeth Bay, and in 1996 moved to Los Angeles after landing a role on the pilot Hollyweird. The show was cancelled but George was paid out in full, subsidising her next two years in Hollywood.

There she earnt supporting roles on films such as Dark City and Steven Soderbergh’s The Limey before her big break came, with David Lynch’s noir thriller Mulholland Drive. Since then she has been continuously in demand: from Alias with Jennifer Garner to the lead in The Amityville Horror opposite Ryan Reynolds, a 2009 Golden Globe nomination for In Treatment with Gabriel Byrne, a role on Grey’s Anatomy, a key role in both the Australian and American series The Slap, The Good Wife and the lead role in the 2016 series Heartbeat.

Along with her fairytale rise to fame came unwanted attention from Hollywood producer Harvey Weinstein, but George had the wherewithal to immediately put his bathrobe-clad advances in their place. “Why did we need him to make us feel worthy, as actresses? Why did Hollywood put so much power in the hands of this man to decide whether we won an Oscar or not, whether we’d be successful or not?” she ponders, before ruefully noting she was demoted to a smaller part from the lead role in Weinstein’s Derailed in favour of Jennifer Aniston not long after. “But we’re tough,” she continues. “Times are changing. They won’t get away with it and they don’t get away with it.” 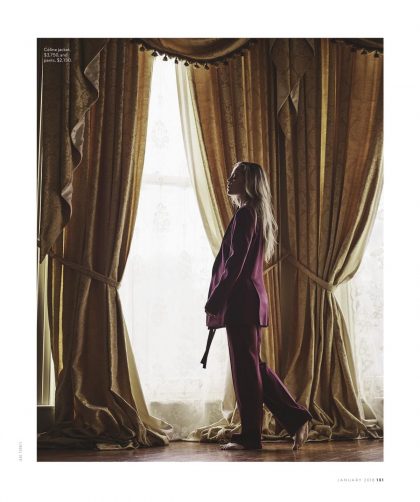 It was Weinstein who introduced her in 2012 to Blanc, a wealthy French entrepreneur with whom she would have Raphaël and Solal. And now it has all gone horribly wrong.

With the case ongoing, George is restricted in what she is allowed to say and do, but she is not holding back on her determination to stay positive. It hasn’t been easy. “There are no words to put into what happened: you cannot believe it. Nobody knows even an eighth of it. It was not good, not good. But I’m better today,” she says. Fellow actor and friend Isabella Rossellini flew to Paris to offer George support, leaving her with a letter containing a message George has adopted as her mantra: “She said there are no mistakes, so maybe your destiny is to be making these very exclusive choices. When you’re forced to limit your choices, you make better choices. And that’s what I’m doing.”

She is adamant her sons will grow up having a loving relationship with their father, as she did, and makes a game each week of searching out special items for their papa – a small rock or a vegetable they’ve grown that all goes into a special bag for him; and they FaceTime as a family at least twice a week. That can’t be easy, I venture. “Nope,” she shoots back, “but I’m doing it. And the boys are very, very good about it. They’re happy, they couldn’t smile any bigger.”

As much as she has missed working, she acknowledges there are worse cities to be tied to than Paris, particularly with her dual passions for fashion and art. “Oh, my God, I love it!” she enthuses. “[The late] Azzedine Alaïa recently invited me to his atelier for lunch, I took Raphael; and I live around the corner from Schiaparelli. I became very close to them going to Cannes; designer Bertrand [Guyon] and I were judges on the jury for Hyères [International Festival of Fashion and Photography] and I just did Schiaparelli’s campaign. So I get these little things I wouldn’t if I was somewhere else.”

The Pompidou is a regular haunt and she often takes the boys to the Rodin Museum, where they love to run in the gardens. “I love that side of Paris – the couture, the art – every single week there’s a magnificent new exhibition.”

While 12 months can be a dangerously long time for an actor to step away, it doesn’t seem to have done George’s career any harm. Her latest Australian film, The Butterfly Tree, filmed before her relationship breakdown, is in cinemas now. Shot over five weeks in Queensland’s Mount Tambourine, the low-budget drama is a beautiful, gentle coming-of-age story that centres on Fin (Ed Oxenbould from Paper Planes) and his father (Ewen Leslie from The Daughter), who are both grieving the recent death of their mother and wife. George plays the tender and sensual character of former burlesque dancer Evelyn, who bewitches them both, with sensitivity and intelligence. “That was a really special little gem,” George says with a smile. “The experience of being in Australia with my two kids, that was wonderful, and the writer-director Priscilla Cameron and the whole crew brought everything to the table.” 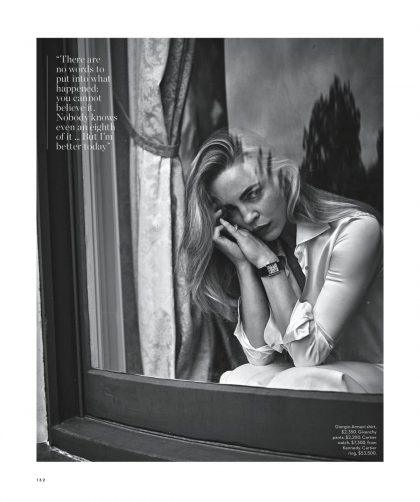 More recently, George recruited the help of her mother, Pamela, to travel to Galway for 10 days to film Don’t Let Go, a drama about a couple grieving the loss of their five-year-old daughter and trying to rebuild their marriage. Then came the offer of a casting for The First, created by Beau Willimon (House of Cards), about the first human mission to Mars. George filmed and edited the scene herself in her apartment, resulting in Penn hand-picking her to play his wife. “I was so excited because I love him as an actor and cherish every scene that man has ever done on film. He looks fabulous and is gorgeous and I would not say no to that!” she says, laughing. “I loved watching him on set the other day – he did this powerful, dramatic scene … it’s nice to be a little bit frightened when you go to work.”

Reflecting on the past 12 months, George concludes she is a better actor, and a better person, as a result. “I noticed that with Don’t Let Go emotions were very available and my demeanour on set was much more relaxed,” she says. “It’s almost like when life beats you down, you get more humble, more calm, reflective. There’s peace in it, you know? So I’m looking forward to the next chapter. Maybe love – who knows?”